On the left side of the chart is the list of tasks and tasks lists (and all projects in the Portfolio Gantt Chart) with their start and end dates. You can double-click on a task in order to have access to its full details.The right side of the chart is where all the action happens. Here you see the duration of each task, represented by the colored segments (and how many days it will take to complete the whole project), who’s responsible for each task and how tasks relate to each other. Above the chart you can find the filters and a few options: the timeline filter allows you to choose how to display the timeline (days, weeks, months or years). The Fit option will choose the right time filter in order to bring all the tasks in one screen.Interaction with tasksThere are several actions you can perform when interacting with tasks on the Gantt Chart:Move the task without changing its duration → Click (in the middle of a segment) + Hold + Drag (left or right)Change the task duration → Click (on the edges of a segment) + Hold + Drag (left or right)Display minimal task details in a pop-up → Click on a segmentDisplay full task details in a pop-up → Double-click on a segmentCreate a dependency →  Hover over a segment → Click on the small circle (in front or after a segment) + Hold + Drag to another task to create a dependencyNOTE: Learn more about the different types of task dependencies hereTask statuses and visual indicators 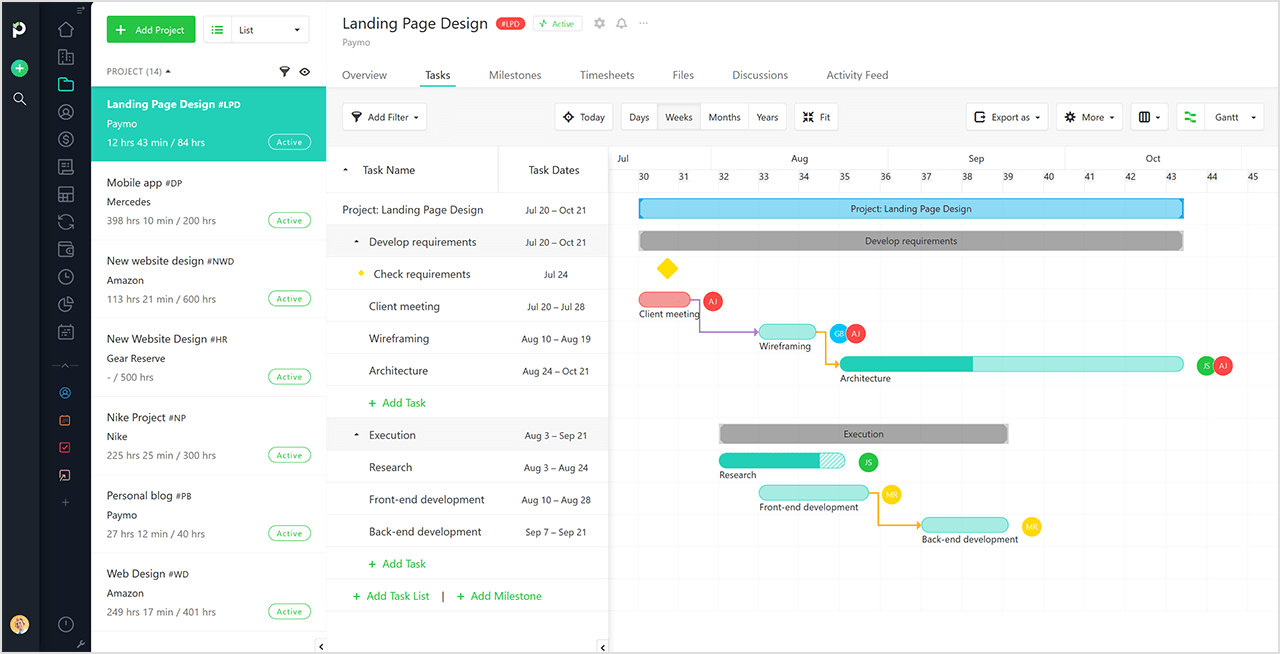 By default, tasks are displayed in light green (“**Wireframing**” task). When the task is displayed in red, it’s an indicator that its due date has passed. As you can see in the example above, the “**Client meeting**” task was due on 31st of August. A task can also have an hours budget. There are a few visual indicators that will show you the progress (hours worked vs hours planned). Let’s have a look at all cases:“Wireframing” – in this case the bar is completely in light green. There are 2 cases when this happens: a) the task doesn’t have an hours budget or b) the task has an hours budget but no time has been recorded yet for that task“Architecture” – in this case you can see there’s a segment in dark green. That segment represents the amount of hours worked (%) from the total hours budget (for that task). As you can see from the image, the hours worked are ~30-45% from the total.“Research” – in this situation you can see there’s a dark green segment and an hachured portion. This indicates that the initial allocated budget hours has been surpassed. From the image you can tell that the budget hours has been surpassed by ~80%.These visual indicators are the same for past due tasks (but colored in red instead of green).Auto-scheduling gap settings 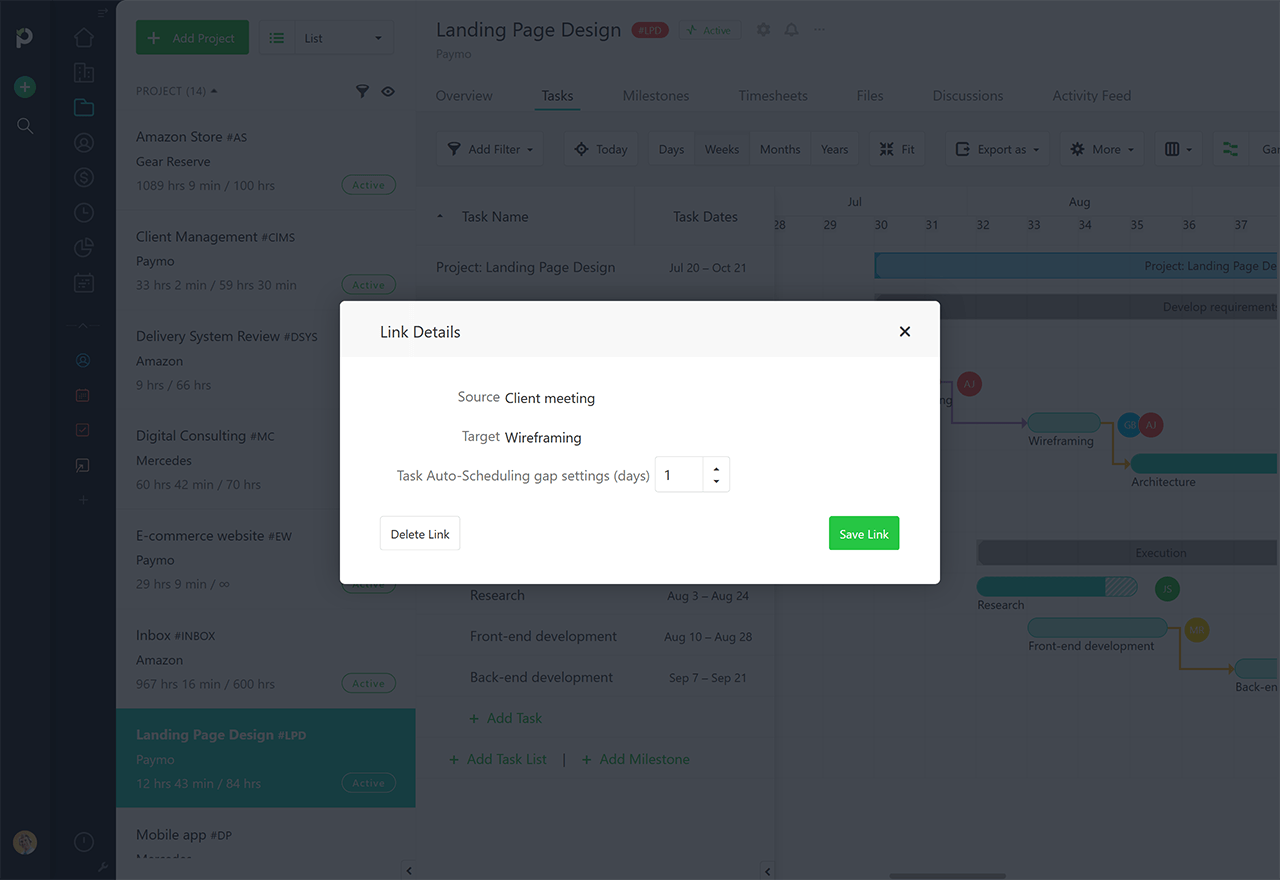 When creating dependencies, you can click on one to set an auto-scheduling gap time in the form of:Lead time (a negative number): refers to the amount of days a succeeding task can be advanced with regard to its predecessor. Or in other words, the number of overlapping days between the two dependent tasks.Lag time (a positive number): refers to the amount of days that must be added between the precedent task and its successor. Or in other words, the number of delay days between the two dependent tasks. For example, let's assume we have design and development team working on the same project. The developers would like to start work, but the designers are late with the designs for the developers by two days. In this case, set the gap days to 2 days, and the timeline will move accordingly.NOTE: The change will be automatically reflected on the Gantt Chart, as long as you have the Auto option checked. Dependencies that have set an auto-scheduling gap are highlighted in magenta. Scheduling settings 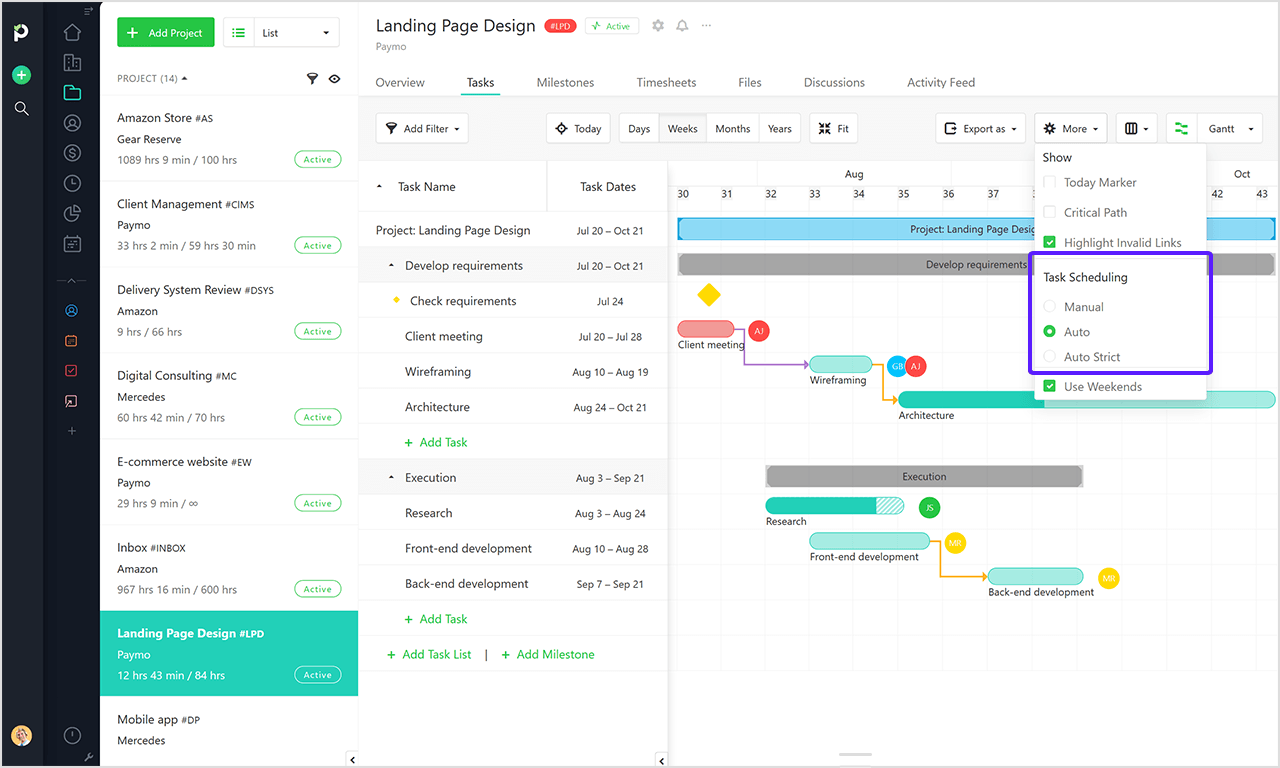 If you click on the top right dropdown you can toggle on/off to display the tasks dates or the task budgets (Worked from total). This way it's clearer if you're over or under budget with your tasks and the specific start and end date of the task.

Was this article helpful?